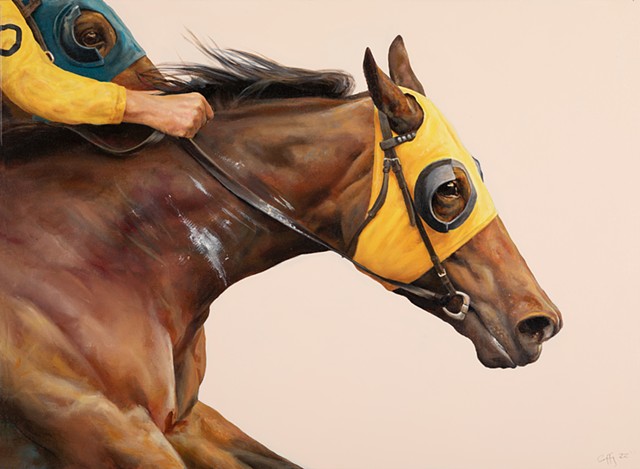 This was a gift for my client's wife who happens to be the great niece of legendary jockey Johnny Longden who piloted Triple Crown winner Count Fleet back in 1943. Growing up she would see him at family occasions but by then his riding career was long over and she really only knew him as a kindly older relative ( who was on the short side:)). My client, a Canadian living in Tampa wrote up a brief history of Count Fleet and Longden's association with him for his wife as part of the gift - I enclose that here for those interested. This painting may or may not (up to you) depict his encounter with the filly Askmenow during his 2 yr old campaign that would result in the last defeat he would ever experience that is mentioned here : It’s 1943, and the World is at War. Young men are being sent away to fight, rationing every daily necessity is in effect and industries are all shifting to war production. The US and the world are hungry for something positive, encouraging and hopeful. Thoroughbred Horse racing, the sport of kings, is one of the top spectator events in the world. 60,000 war weary fans attended the 1943 Kentucky Derby as millions listened to the race live. Fannie Hertz, wife of John D. Hertz of Car Rental fame, bred Kentucky Derby winning “Reigh Count” with “Quickly” and sired “Count Fleet” in 1940. Described as not a particularly attractive horse, called "narrow, light-waisted, and flat-muscled" by one expert and “too leggy and light boned” by others. He also had an unruly temperament. John Hertz initially did not think much of Count Fleet, fearing the horse would kill someone. He planned on selling him until jockey Johnny Longden pleaded with him to keep the colt. As a two year old Colt, Count Fleet was a very challenging mount, with Longden one of the only Jockeys to be able to handle him. As he started racing as a 2 year old, his early record was unremarkable. Longden stated ”He beat himself…He never should have lost a race, but he was a tough customer to handle, green and rough in those early starts, and you couldn’t take hold of him –you couldn’t even properly guide him”. But he ultimately never finished less than 3rd place and was crazy fast. But The Count wasn’t only a speed devil — he was also a lover boy. In the Belmont Futurity, as Longden maneuvered the two year-old toward the lead, he drew alongside the filly Askmenow, a daughter of champion Menow. As Johnny told it, “…The Count decided he didn’t want to leave her. She was in that delicate condition that appealed to him. I couldn’t budge him. He just galloped along beside her and let Occupation steal the race.” It was the last time Count Fleet would ever lose and as a 3 year old went on to dominate North America, never losing a race. In the Kentucky Derby in 1943, Johnny Longden and the Count did not disappoint, rolling passed Blue Swords and Slide Rule to a victory. Then it was on to Pimlico, where the colt scored an even more decisive victory in the Preakness, beating Blue Swords by 8 lengths. He won the Withers Stakes before heading to Elmont, New York for the Belmont Stakes where he captured the Triple Crown by scoring a 25-length victory, a margin that stood as the record until surpassed by Secretariat in 1973. When the season ended, Count Fleet was voted Champion Three Year Old and named American Horse of the Year. After the race, Count Fleet’s distinctive Yellow silks were auctioned off to support the War effort Bonds for $50,000, the equivalent to $800,000 today. Count Fleet never fully recovered from a leg injury during the Triple Crown win. He was officially retired to stud in July 1944 having won 16 of 21 races and went on to enjoy great success as a sire. He again lived up to his early description by Longden as a “lover boy” … from 434 named foals, he sired 267 winners and 39 stakes winners. Himself the son of Derby winner Reigh Count, he went on to sire another Derby winner, Count Turf. Count Fleet was named to the Racing Hall of Fame in 1961, 3 years after Johnny Longden in 1958. Count Fleet was the longest-lived Kentucky Derby winner on record at the time he died at the age of 33 years, 8 months, 9 days on December 3rd, 1973.